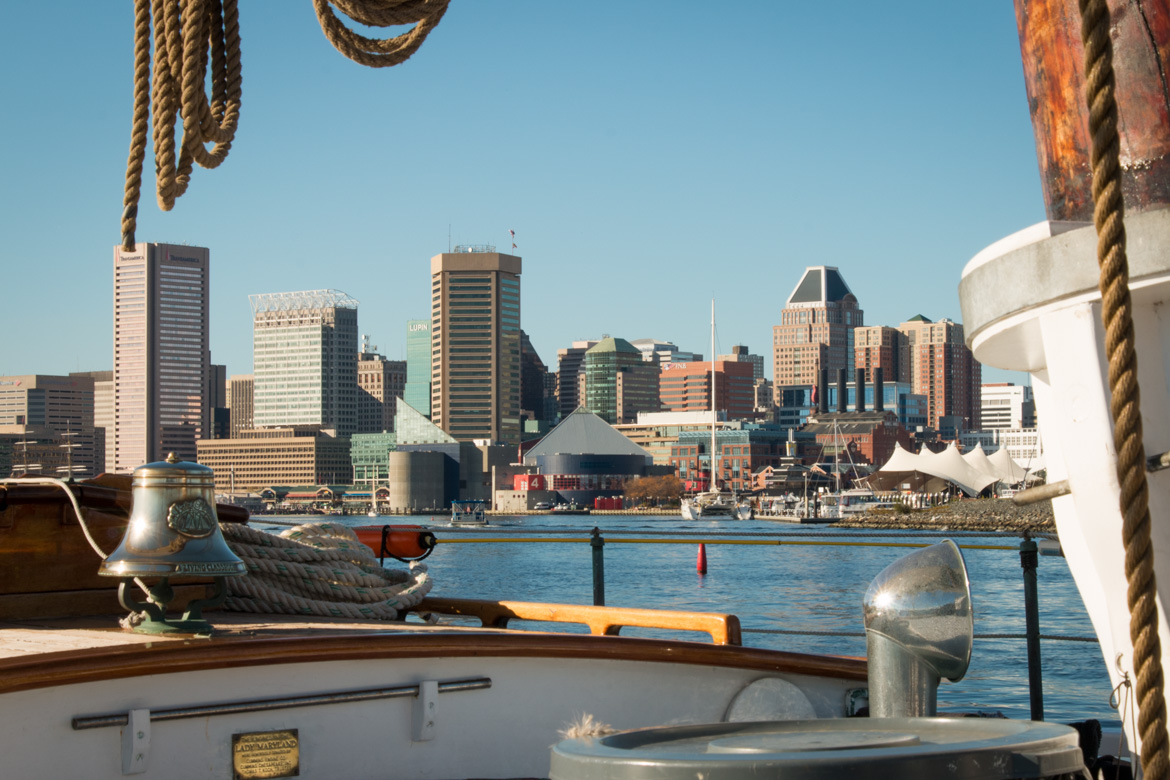 As the future of 2016 grows from burgeoning horizon, I wanted share a few updates on recent projects. Last year proved exceptional for my public art mission to interpret, critique, activate and improve the public space of our everyday lives. 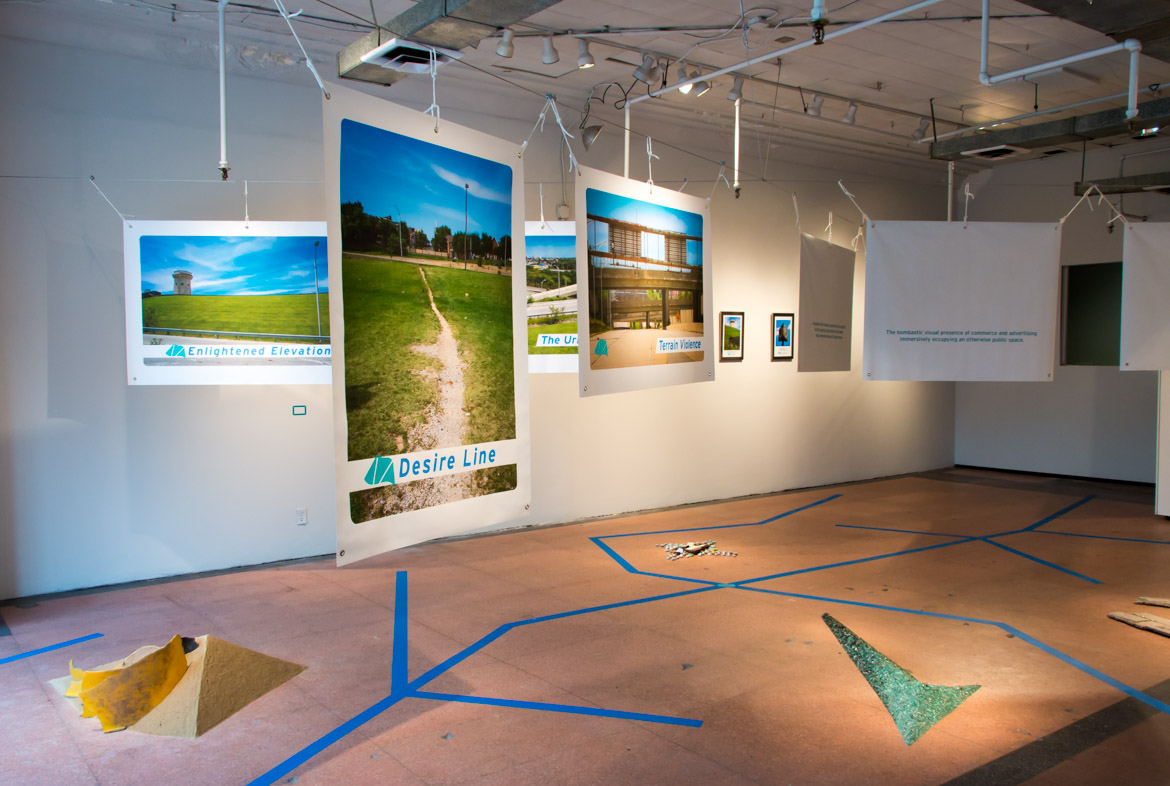 I had the great privilege of staging my first true solo show with ICA Baltimore at Current Space last spring. With the support of a Rubys Grant, my show SiteLines was the culmination of a series of radical walking tours I organized in 2014 seeking to understand overlooked public spaces in and around some of Baltimore’s highway foleys and pedestrian malls. It so happened that the show opened just as the Baltimore Uprising began to take shape in the streets. 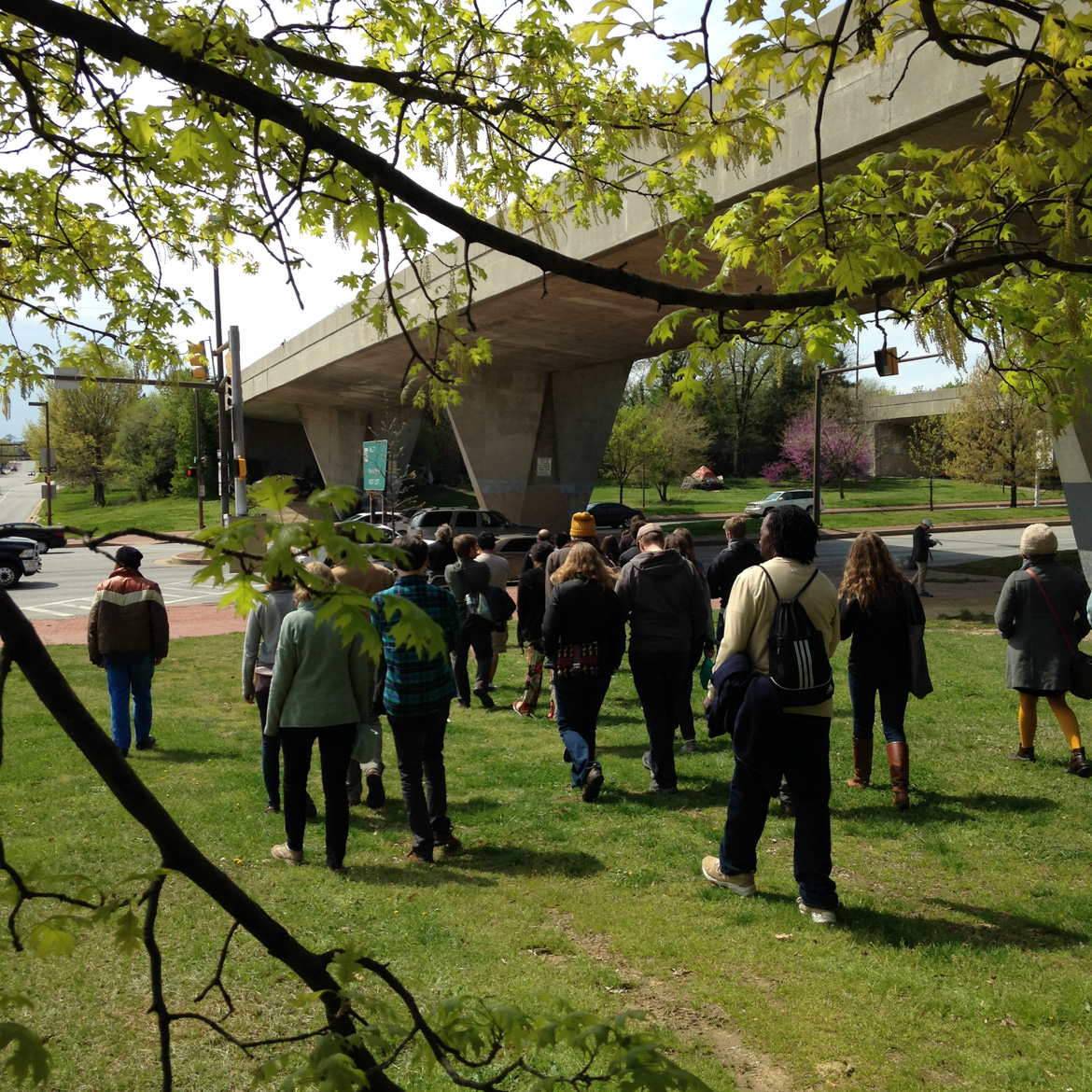 The day of the first major Freddie Gray march, I led 44 participants on my Crossing the Highway to Nowhere tour. As I talked about West Side struggles against top-down planning, a helicopter hovering over the nearby protest split off and followed us as we gathered at the edge of Route 40. After crossing the highway our group began to head back to the gallery, only to run directly into the Freddie Gray march. To join was urgently appropo. On that day a modest crowd of Radical Pedestrians merged with a much larger force of walking movement in our city.

Here is what a few others had to say: ArtFCity, Bret McCabe, GBCA, Landscape Architecture Magazine, and BmoreArt. 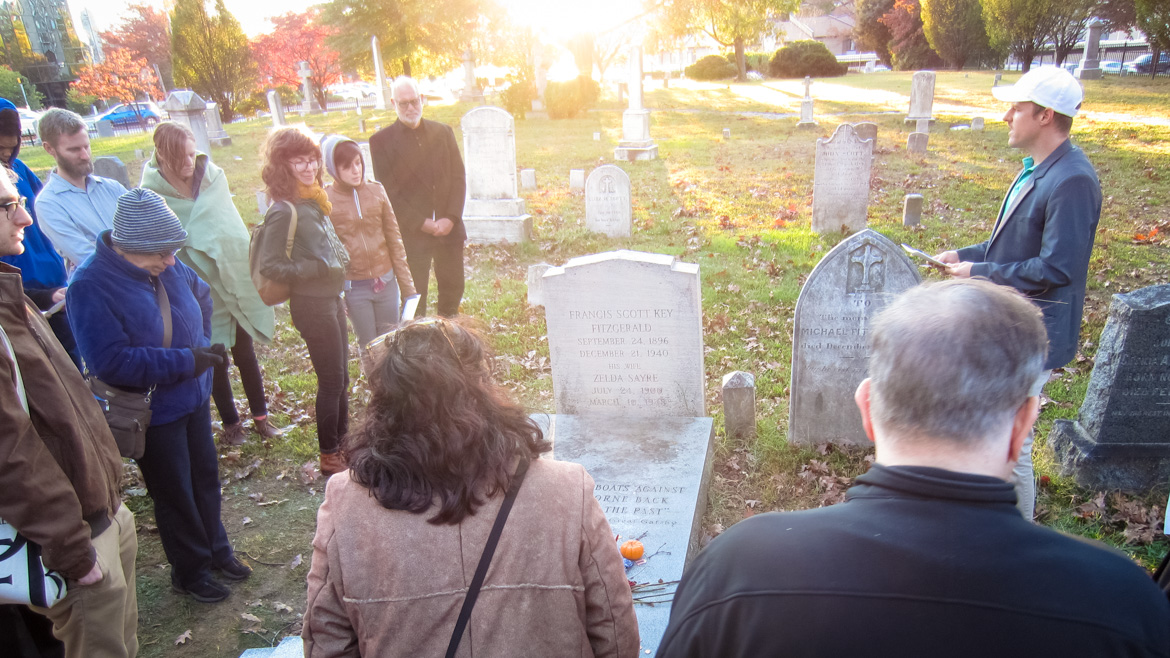 The Ragged Edge of Rockville

After SiteLines, I  was invited to develop a New Public Sites project exploring the invisible sites, contradictory features and historical spirits embedded in downtown Rockville for Come Back to Rockville, a two person show with Naoko Wowsugi at VisArts curated by Laura Roulet. Naming my project, “The Ragged Edge of Rockville”, I created a gallery installation, shot new videos and staged a series of tours in and around VisArts, the Rockville Library, the Beall Dawson House and a special gravesite. Along the way we learned that Rockville twice entirely razed its downtown. What’s since emerged is an uncanny image of pedestrian urbanism embedded with the beginnings of civic spaces while hiding parking garages for car-bound shoppers. Thankfully the various redevelopment schemes spared the town’s historic Catholic cemetery – final resting place for literary icons F. Scott and Zelda Fitzgerald. Meanwhile, Mark Jenkins at the Washington Post took a stroll through the gallery and wrote this review. 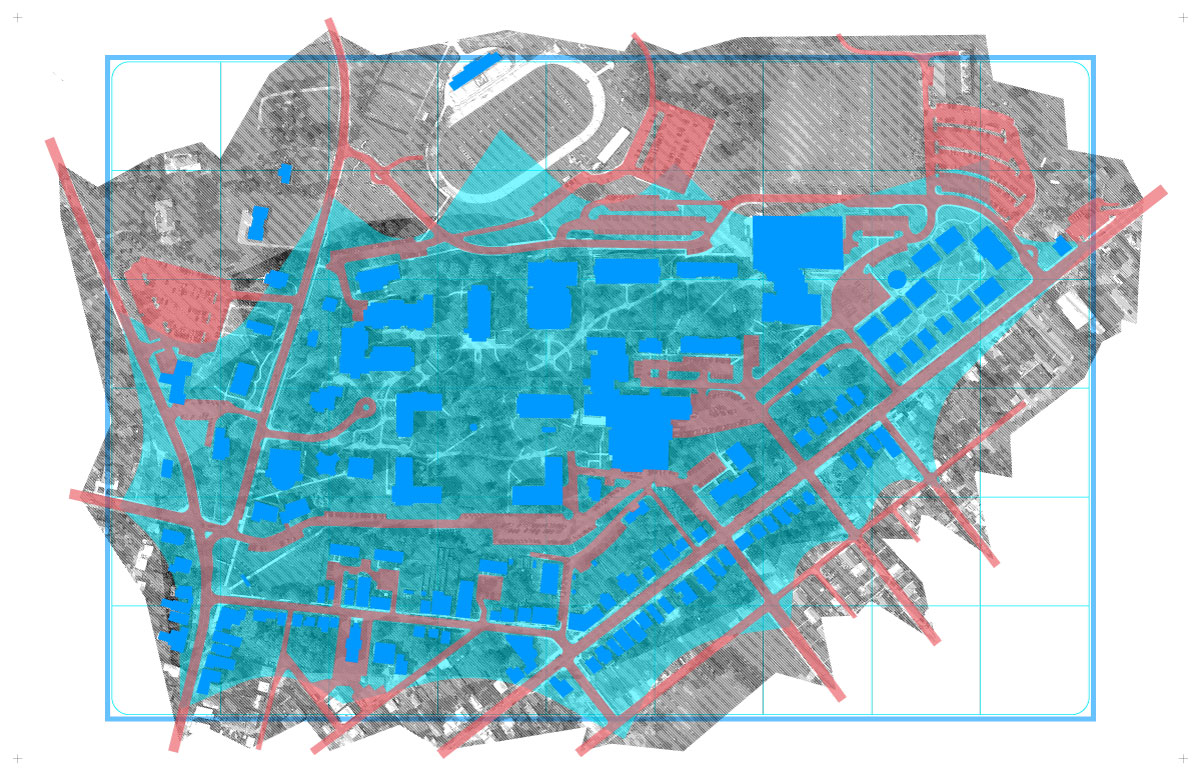 Immediately following my Rockville drift, I began work on another New Public Sites tour and installation, this time in collaboration with McDaniel College students and residents of Union Street in Westminster, Maryland. I was honored to have “New Public Sites – McDaniel / Westminster” commissioned by curator Izabel Galliera for her group show Alternative Cartographies. Through a new map, bulletin boards and Shards of Site, we investigated the overlooked yet meaningful public spaces between an idyllic hilltop and historic neighboring streets. New Public Sites are not just in big cities, but also among rural towns and suburbs alike. Rebecca Juliette from BmoreArt still made it up and posted this on the group show.

Infinite Thanks for all the support. Let’s keep on projecting thoughts from radical walks through 2016 and beyond. Check back for updates on my forthcoming tour shattering Baltimore’s Inner Harbor Spectacle, and other delightful spring walks.

PS: Many thanks also to Baltimore Clayworks and School 33 for the opportunities to lead wanders through Mount Washington and of Baltimore City’s amazing murals. 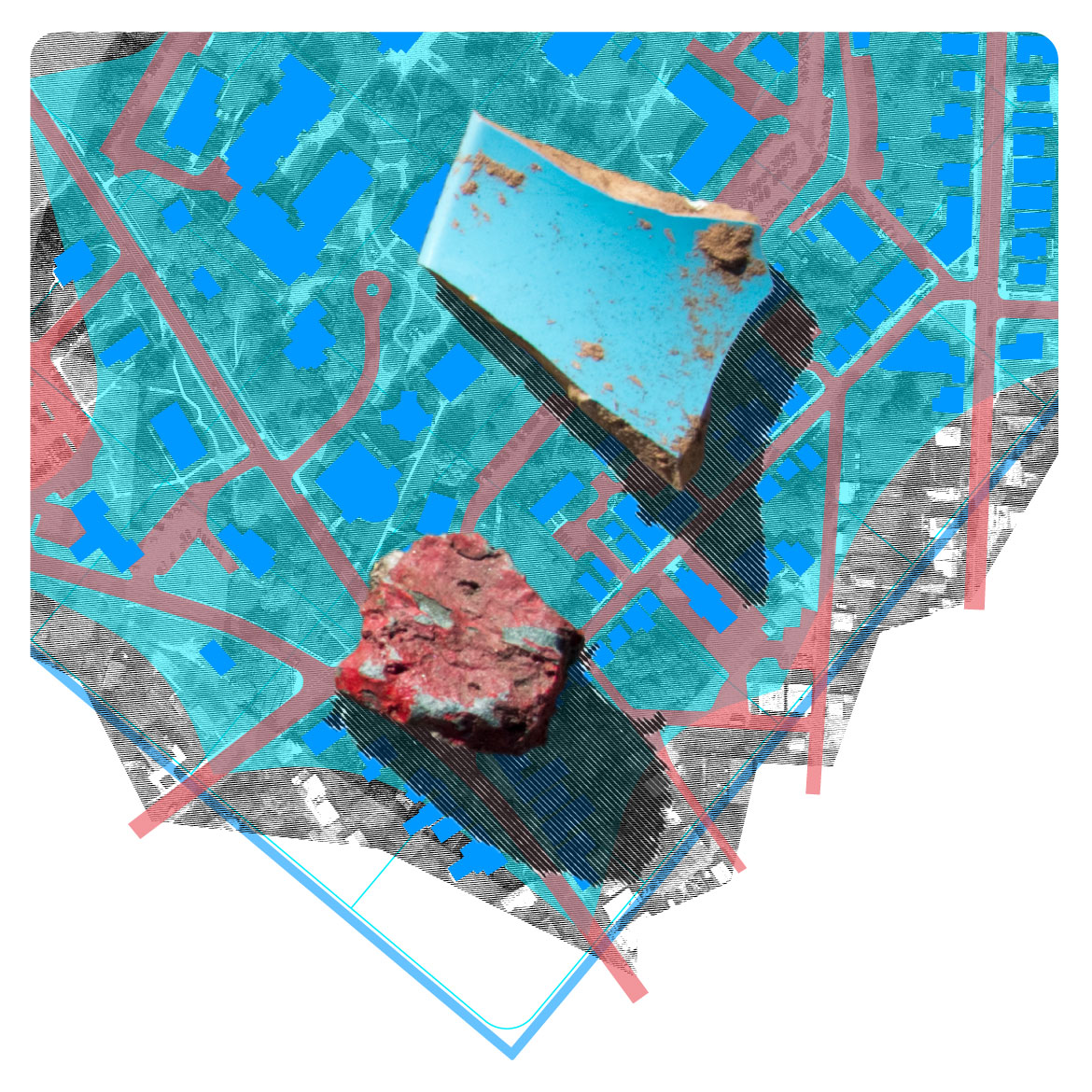 From Rockville to Westminster, I’ve been keeping busy this fall orchestrating back-to-back tours of Maryland’s sub/urban ambiguity. For those of you living in the reaches north of Baltimore, this next tour is for you! Explore the invisible sites, commanding vistas, and meaningful connections between McDaniel College and Union Street in Westminster, Maryland through New Public Sites – McDaniel / Westminster. Developed in collaboration with students and residents for the exhibition Alternative Cartographies, this walking tour and multimedia gallery installation investigates the overlooked yet meaningful public spaces between an idyllic hilltop and historic neighboring streets. Featuring sites such as the Epic Embankment, VistaBowl, Sidewalk Signatures, and Boys & Girls Club, New Public Sites – McDaniel / Westminster discovers how pedestrians activate intriguing moments between learning and leisure.

Pickup a free map in the gallery or download your own copy here:
https://newpublicsites.org/mcdanielwestminster
Be a part of the conversation on facebook.

Discover the Ragged Edge of Rockville! 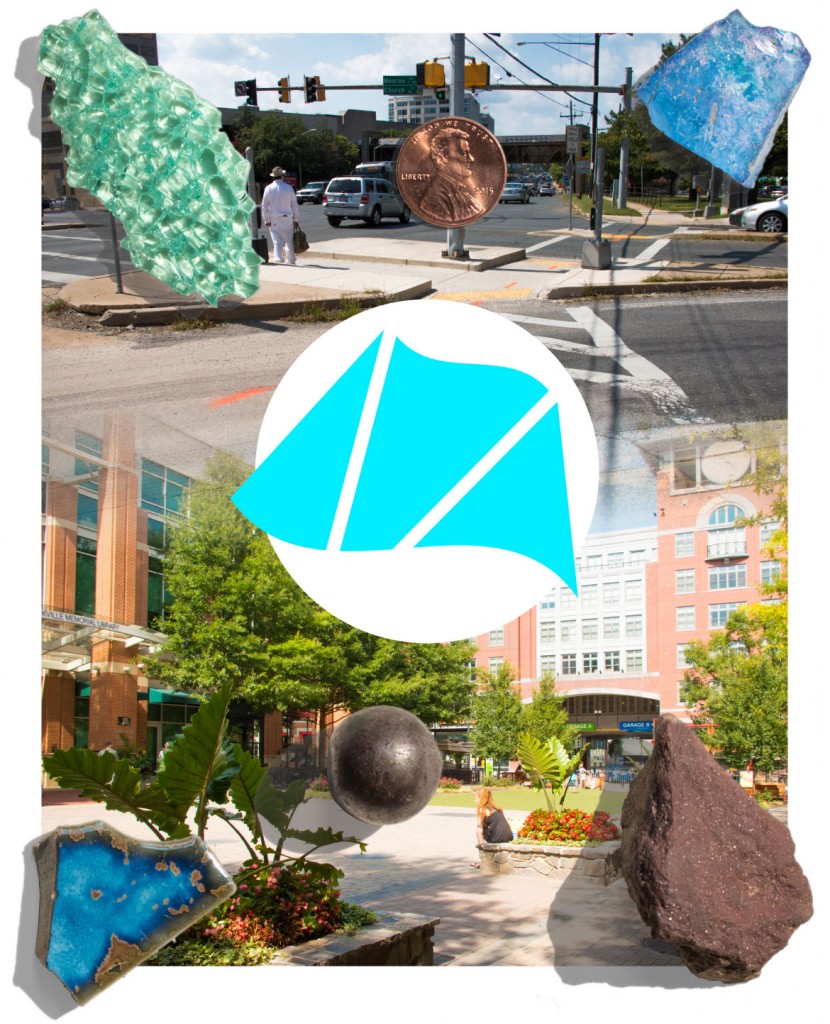 Explore the invisible sites, contradictory features and historical spirits embedded in downtown Rockville. Radical walking tours and a gallery installation of banners, videos and maps stitch together an array of new and old buildings, urban and suburban places, and psychically – charged, poetic sites. New Public Sites – The Ragged Edge of Rockville is part of Come Back to Rockville!, a two-person, participatory art project with Naoko Wowsugi, curated by Laura Roulet and sponsored by VisArts. Click here for the full press release.

As the historic seat of Montgomery County turned booming DC suburb, Rockville stands as an example par excellence of Sub/Urban Ambiguity: “Cities and suburbs posing as enigmas of one another.” The title of the project is inspired by a quote from F. Scott Fitzgerald’s The Great Gatsby, in which the narrator reflects on how his former home in the “Middle West seems like the ragged edge of the universe now”. Tour activities include making paper rubbings and collecting Shards of Site while engaging memorials of literary tribute and contested Civil War histories. Along the way, you will explore newly created public spaces aspiring to urban authenticity while beholding suburban voids overturning in speculative wait.

*Before the 3pm tour, be sure to check out VisArt’s F.E.A.S.T. brunch artist project fundraiser happening from 11:30am-2:30pm. Click here for more info and tickets.

With the conclusion of my ICA Baltimore solo show at Current Space last week, my year-long, Rubys Artist Project Grant funded series SiteLines is now complete. From New Public Sites tours of sub/urban ambiguity, to videos, banners and shattered piles of shards, the spirit of place in Baltimore lives on. Thanks to everyone who provided financial support, person-power, guidance and participation. You are all truly Radical Pedestrians. Below is a recap of the infinite freedom produced.

On wandering into memory’s weeds thanks to one of Graham Coreil-Allen’s New Public Sites walking tours, Bret McCabe, Back and to the Left, May 9, 2015 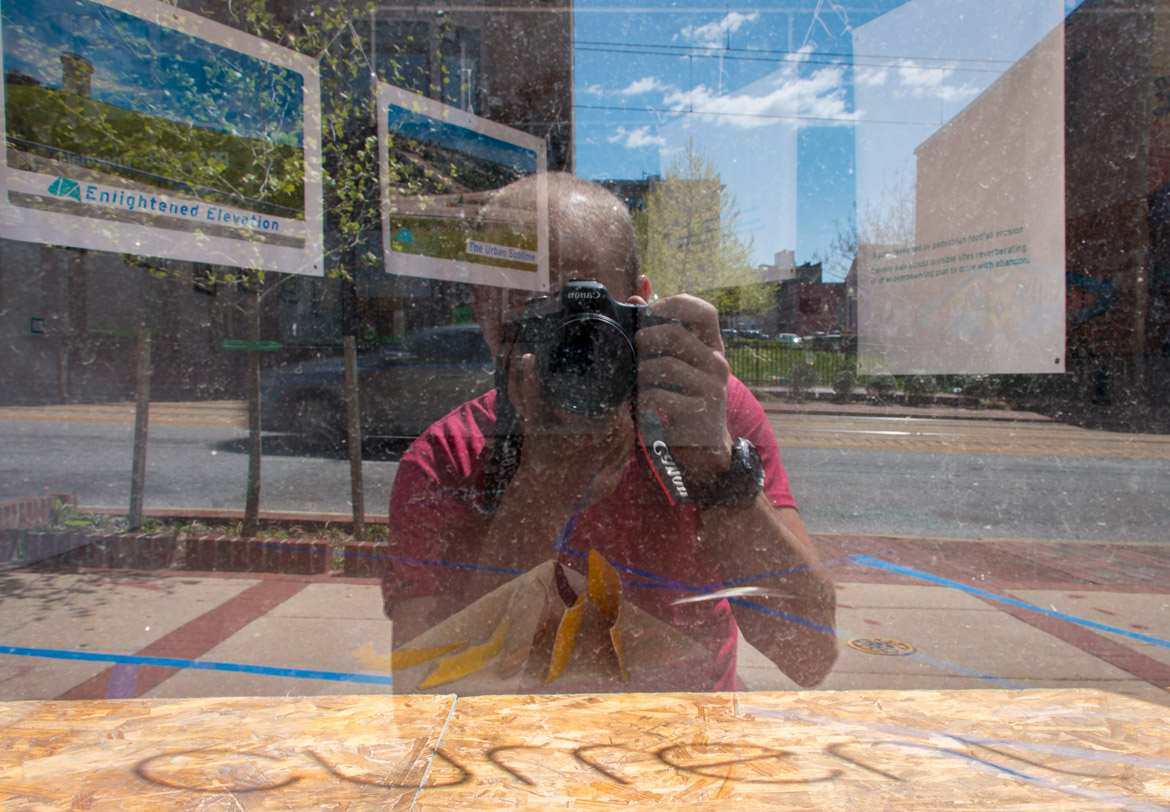 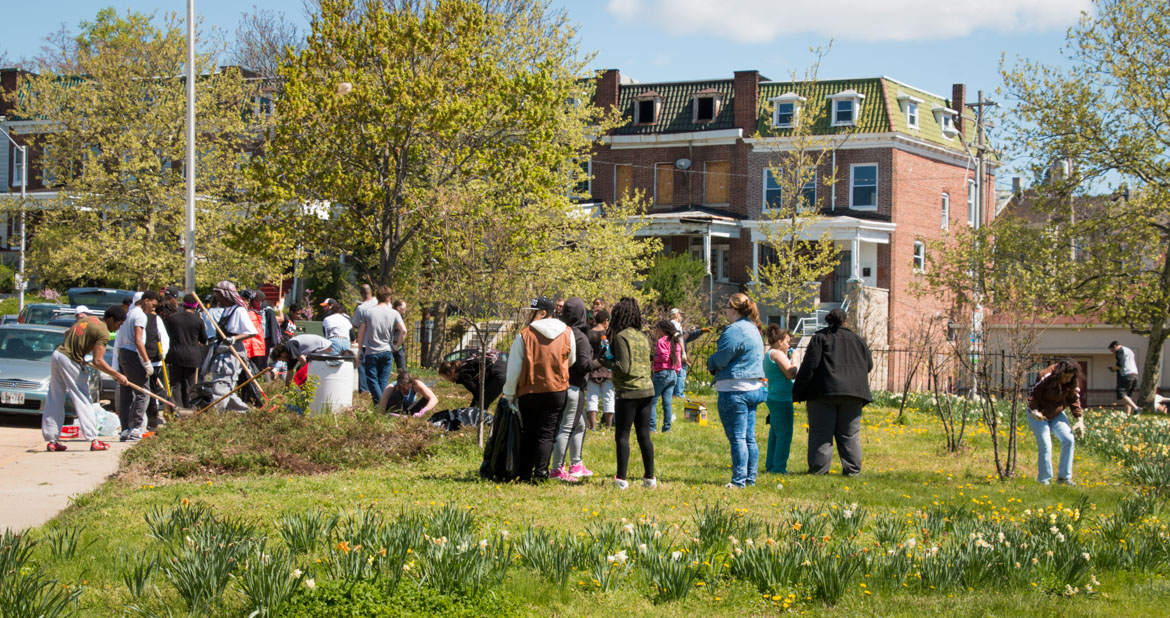 Over the past week we’ve seen an outpouring of peaceful protests and direct actions as Baltimore residents express the pain of economic inequality and seek justice for victims of state violence. Out of respect for the Baltimore Uprising, I have cancelled the May 2 New Public Sites “Formative Drift” walking tour so that we can focus on helping our neighbors. On Tuesday, April 28, we came together to clean up our neighborhoods and share public expressions of positivity. This is the Baltimore we know and will continue to nurture. Lets stand in solidarity of the people of Baltimore in this struggle to bring peace, opportunity and improvement to our people and places.

A message on ways to help from local art-activist group Force:

The best way to help right now is to support grassroots organizations who have been doing sustained organizing to combat poverty and racism in Baltimore, through policy, direct action, and education. Here are a few groups to consider:

Bmore United is a coalition of concerned citizens and organizations working for justice in Baltimore City.
http://bmoreunited.org

The No Boundaries Coalition is a resident led community organization working to bring neighborhoods in Central West Baltimore together across race and class.
http://www.noboundariescoalition.com/get-involved/donate

Leaders of a Beautiful Struggle is a grassroots think-tank which advances the public policy interest of Black people, in Baltimore, through: youth leadership development, political advocacy, and autonomous intellectual innovation.
http://lbsbaltimore.com/donate

Later reflecting on a parallax of transit. The com

Single lane cycling in witness of a #raggedrubble

Glimpsed on the 8th floor planning domain: a wall

Thanks to the participants of #RadicalPedestrianis