NPS in the Venice Architecture Biennale 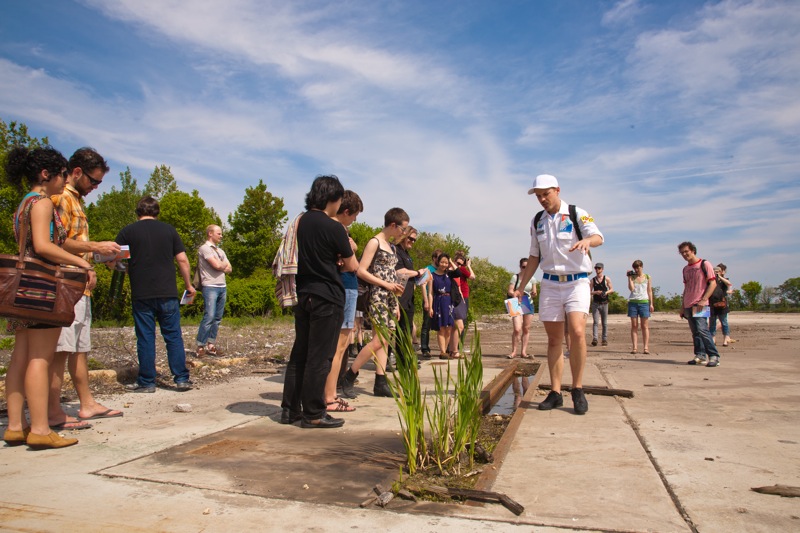 Situated within disparate zones of overlap, contradiction, ambiguity and interstice, the ongoing New Public Sites project consists of playful walking tours, radical maps and poetic typology that investigate the ways in which invisible sites and overlooked features exist within our everyday environment. The New Public Sites walking tours will be included in Spontaneous Interventions: Design Actions for the Common Good, the official U.S. presentation at the 13th International Venice Architecture Biennale. Organized by commissioner and curator Cathy Lang Ho of the Institute for Urban Design, with Ned Cramer and David van der Leer, the exhibition features an array of direct action strategies for improving the urban public realm, represented through a system of interactive hanging banners and pedestrian installations. More details to follow on New Public Sites walking tours in Venice later this summer. Official press release below:

(New York, NY – May 2012) — The U.S. Pavilion at the 13th International
Architecture Exhibition of the Venice Biennale, organized by the Institute for
Urban Design on behalf of the U.S. Department of State’s Bureau of Educational
and Cultural Affairs, will be devoted to the theme Spontaneous Interventions:
Design Actions for the Common Good. The exhibit will feature 124 urban
interventions realized in U.S. cities in recent years. The selection was narrowed
down after a search process that included an open call for projects, which
yielded over 450 submissions.

“The selection was difficult because there are so many projects that deserve
attention,” said Cathy Lang Ho, commissioner and lead curator of the U.S.
Pavilion. “It’s evident that there is a growing desire among people everywhere—
not just in the U.S.—to play an active, hands-on role in shaping the cities they
live in.”

Spontaneous Interventions focuses on projects initiated by architects,
designers, planners, and everyday citizens, aimed at bringing positive change
to the urban realm. It captures one of the most compelling contemporary urban
trends, wherein individuals are taking it upon themselves to create projects
that expand the amenities, comfort, functionality, inclusiveness, safety, and
sustainability of cities. From parklets to community farms, guerrilla bike lanes to
urban repair squads, outdoor living rooms to pop-up markets, sharing networks,
and temporary architecture, Spontaneous Interventions highlights viable citizen-
led alternatives to traditional top-down urban revitalization tactics.
Spontaneous Interventions resonates on many levels with the overall Common
Ground theme of the Biennale conceived by director David Chipperfield. The
projects featured in Spontaneous Interventions are characterized by their
interest in collaboration, in serving the collective needs of a community, and in
improving the literal common ground – public space.

Image courtesy of NYC DOT via The New York Observer.

Only six months after the Arcade Parade, Holly Whyte Way is officially becoming a reality! This week the New York City DOT announced its proposal to connect the privately-owned public plazas and arcades that run from 51st to 57th Street, between Sixth and Seventh Avenues. Since then, Community Board 5′ Transportation Committee has approved the plans for crosswalks, stop signs and warning markers that will alert motorists to yield to pedestrians moving along what will be soon be officially known as 6½ Avenue. Needless to say, Friends of Privately Owned Public Space is celebrating. Special thanks to Matt Chaban for his wall-to wall coverage of the development. More details below…